Spring fashion week already seems like a distant memory (especially with the fall 2012 shows quickly approaching), but I am marching onward to cover Milan and Paris.  In Milan, I fell in love with the Gucci, Dolce & Gabbana, and Emporio Armani collections.

This season, Frida Giannini outfitted the Gucci woman in flapper-glam dresses and pant suits. The look was strong and sexy (as it must be with Gucci), and ready to hit the town. Art deco patterns adorned everything from dresses to pants, all rendered in a bold palette of emerald, black, white, and gold. The series of shimmering drop-waist dresses were incredibly fun and glamorous--some were fringed for an extra dose of attitude.   If I were in the market for a knockout party dress, this is the collection I would be pulling from. 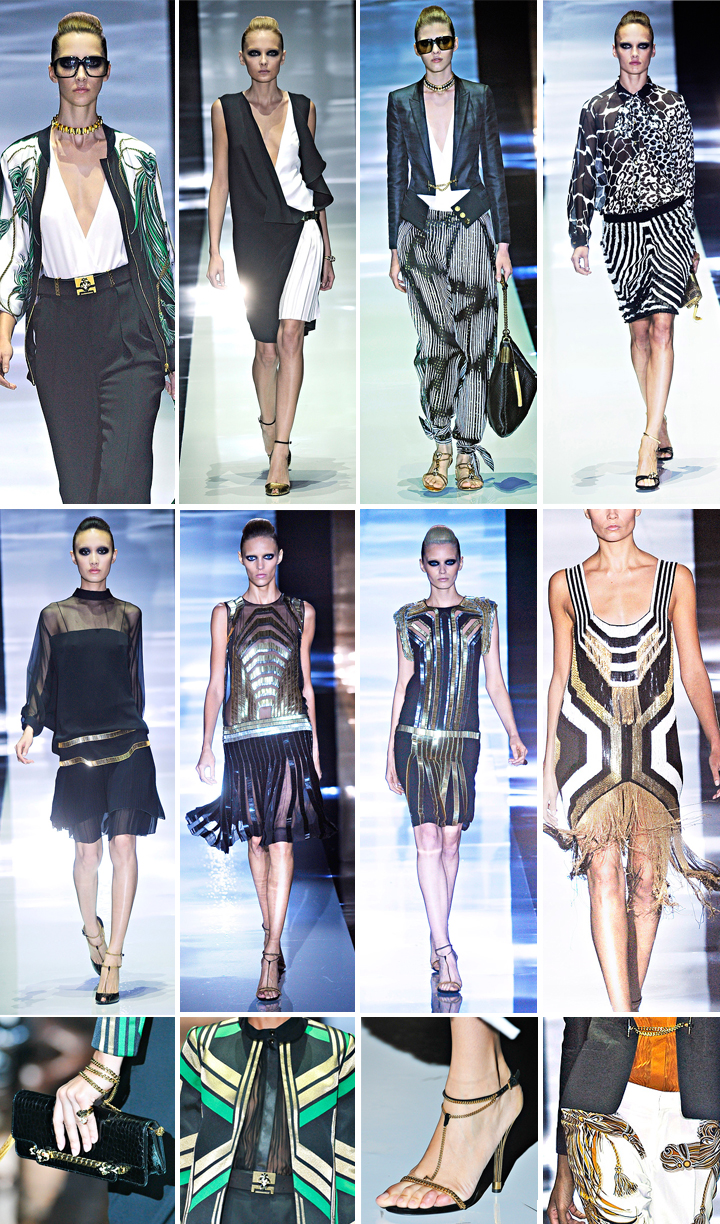 For their spring collection, Domenico Dolce and Stefano Gabbana went back to their Italian roots and channeled a young, sexy Sophia Loren.  They also must have looked to the kitchen for inspiration, because every runway look was adorned with food.  Models wore eggplant and onion printed dresses, bow tie pasta earrings, and pepper and garlic trimmed handbags. If you think that sounds tacky, take a look at the garments--they are luxe, feminine, and glamorous. After a parade of vegetable-print circle skirts and bra tops, the show ended with a series of colorful jeweled corsets.   This was a happy, exuberant collection. 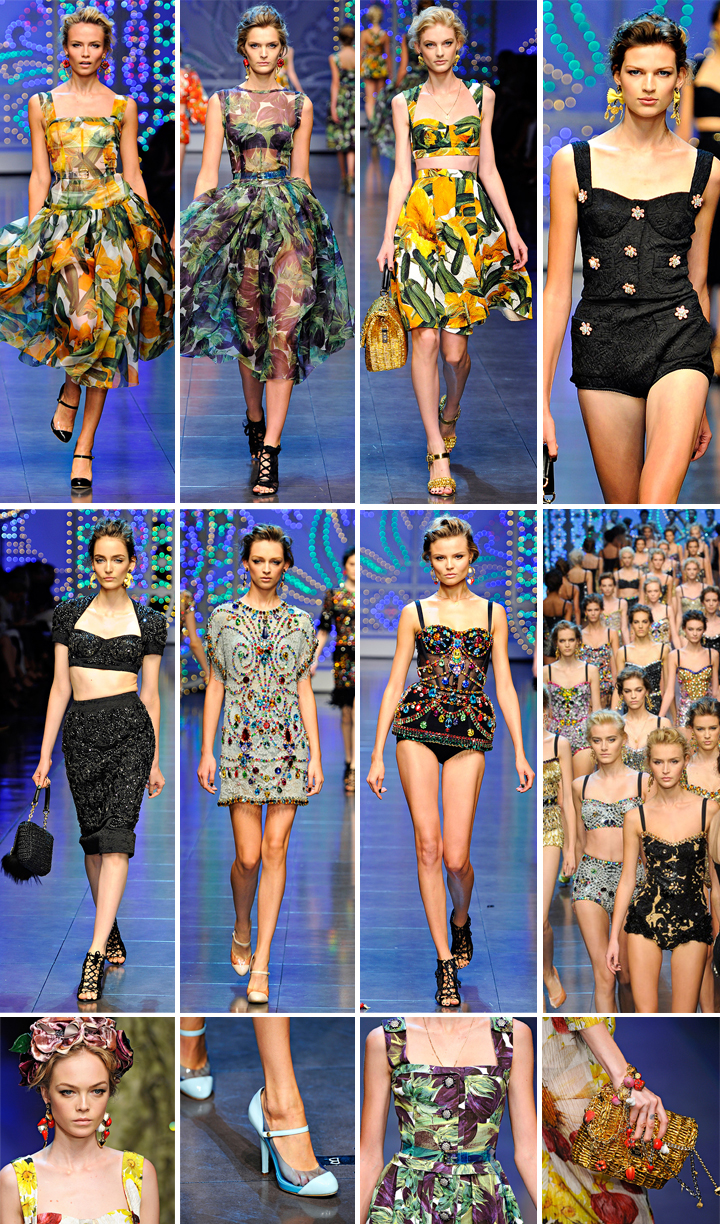 Giorgio Armani's collection for his Emporio Armani line was a departure from most spring shows. Presented in a stark black and white palette, his models marched out as platinum-bobbed clones. They had a polished Parisian air about them, thanks to the white boater hats and boxy handbags. All of the looks were very clean and graphic, with seams and edges defined by contrasting trim. This was a striking collection that was also very wearable--I can picture the separates and suiting fitting well into most women's wardrobes. 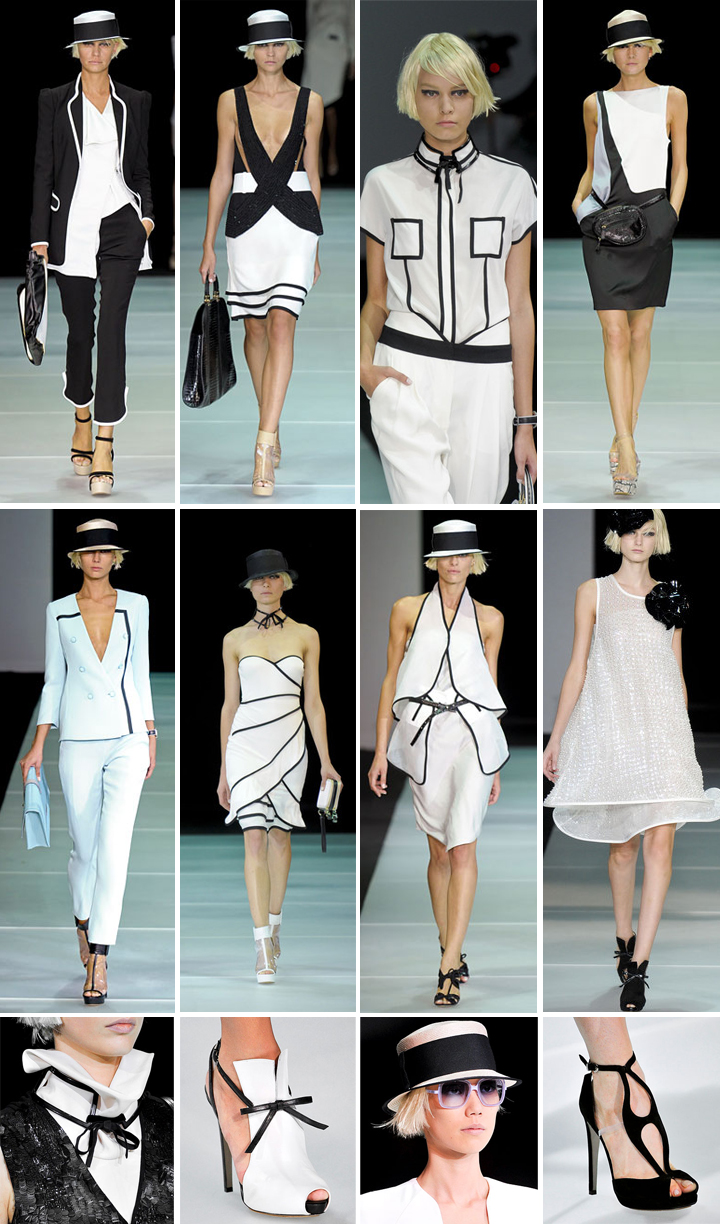