Ombre gradation has been in vogue for several seasons now, applied to nearly every clothing and accessory item imaginable, and even emerging as a hair color trend.  Even though it's frequented runways and stores for a solid two years, the gradation trend lives on, as evidenced by the ombre fabrics at Dries van Noten and Alexander McQueen's latest shows.

I love a good gradient, but had never considered how chic it could look on nails until I spotted this ombre manicure in Marie Claire magazine. 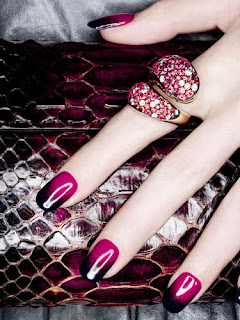 I tried to duplicate this look using similar magenta and black polishes, but the sky's the limit when it comes to selecting colors.  Creating this effect was a little tricky.  I began by applying one coat of magenta polish to all my nails and allowing it them to dry.  Next, I applied black polish to the upper third of my nail.  While the black was still wet, I then switched back to the magenta polish brush and swept the black down the nail, allowing it to mix with the magenta polish on the brush.﻿  I alternated between blending with the black brush and magenta brush until a smooth gradient was achieved. 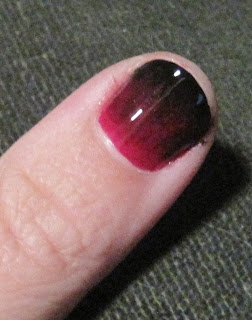 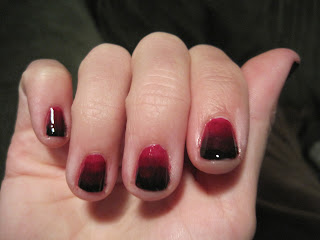