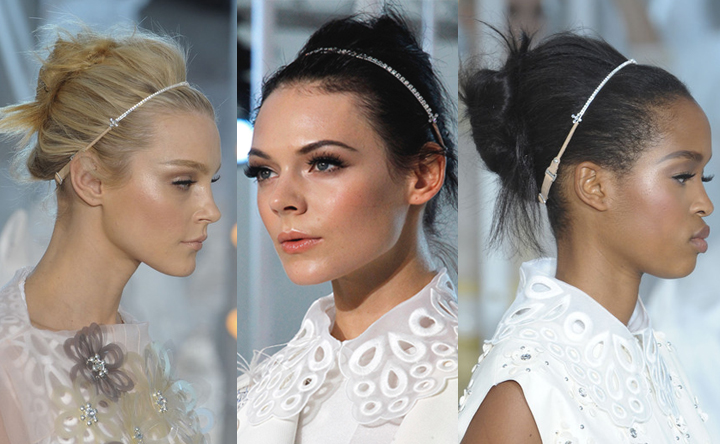 It's been a while since I've done a beauty D.I.Y. post, but I couldn't resist recreating the feminine beauty look on Louis Vuitton's spring runway.  The models' makeup was dewy with a major emphasis on lashes, and hair was coiffed into messy bun/twist hybrids topped off with sparkling headbands.  I have a feeling that the headband is making a comeback this year, as already evidenced by Charlize Theron and Michelle Williams' Golden Globe hairstyles.

HAIR:
The hair was MUCH simpler than I expected.  I prepped my tresses with my new favorite product, Oribe's Dry Texturizing Spray, which built up some volume at the roots and imparted a dry, piecey texture, perfect for the updo.  After several sprays and some teasing at the roots, I finger combed (you don't want to brush out the texture) and pulled my hair to one side, bobby pinning straight up the back to hold it in place.  Then I started my twist, coiling up the base of my head toward the crown, covering up my row of bobby pins.  Instead of leaving the ends to stick out at the top, I wrapped the twist around and back down to the base, and pulled the body of the twist to overlap, leaving some ends to stick out haphazardly.  Then I secured with 3 spin pins--these work wonders!  I added a couple more bobby pins as needed, but left things pretty messy.  To finish off the look, I turned an old rhinestone necklace (from high school prom!) that I found in the back of a drawer into a sparkly headband.  Thank goodness I save weird stuff. 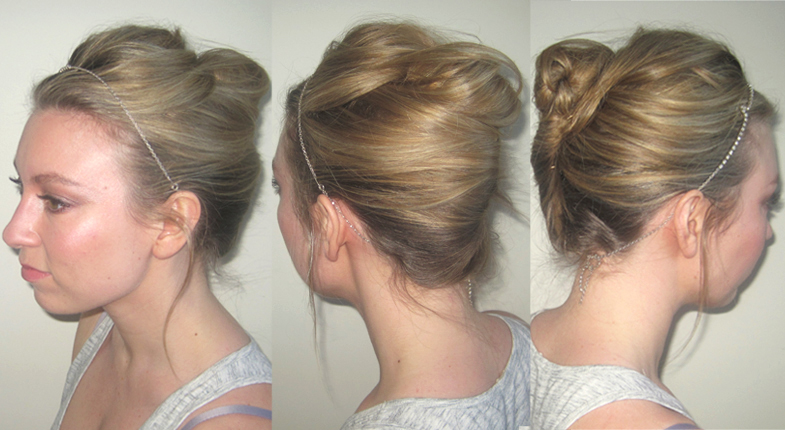 MAKEUP:
The beautiful runway makeup was created by guru Pat McGrath.  The skin was extremely dewy, so I began by using a luminizer all over my face.  I think I overdid it, because my face is looking more oily than dewy in these photos.  I used my usual liquid foundation next, and then went back in with the luminizer over cheekbones, under the brow bone, on the inside corners of my eyes, and at the cupid's bow of my lips.  I used a sheer pinky peach blush on the apples of my cheeks and slightly contoured my cheekbones.  For my eyes, I found that the Dior Rosy Tan palette provided the perfect range of colors.  I used the shimmery beige all over the lids, the darkest brown to contour the socket line, then the lightest pink to highlight the center and inner corner of the lids.  This was followed by a bit of dark brown liner, just on the upper lids.  For the lower lids, I just softly lined with the dark brown eyeshadow.  Next, I applied mascara and pulled out the false eyelashes.  This was my first time applying false eyelashes, so I don't have any real words of wisdom, except to make sure the glue sets up a little before trying to adhere the lashes.  For the Louis Vuitton show, Pat McGrath's team of makeup artists sewed together TEN pairs of false eyelashes for each model.  My lashes look puny in comparison.  I finished off the look with some quick brow grooming, and a little bit of peachy lip gloss. 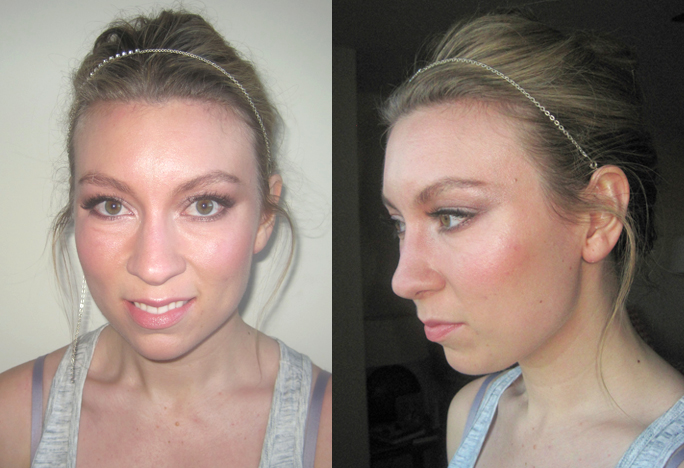